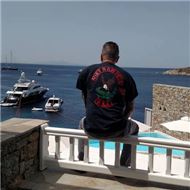 OK, here's a little bit about us. We're here as a couple, both my wife Monica and I. We both ride HD's but at the present time, she's in between bikes. We like to think of ourselves as success stories given where we've come from and what we've accomplished in life. We're living proof that you can overcome obstacles and what good ole fashioned hard work will get you. We're both educated and blessed in that we have great jobs and enjoy what we do for a living. We like to think of ourselves as low key, down to earth people. We understand that we've been blessed given the life that we lead and offer our thanks on a daily basis for what we have today.

We believe in God and we believe in the right to bear arms. We don't voice our opnions unless asked and don't believe in pushing it on others unless you start voicing your opinion. If you do, expect to get a response that you might not necessarily agree with.

We have a great family and friends in our lives that we've made some great memories with but, our biggest passion these days is for our grandkids. We are open-minded, sincere, honest and enjoy meeting new people. We're here to look for friends in the area and meet new friends from other areas who like to ride (we don't mean barhop).

We tend to surround ourselves with people that make us smile and laugh so, if this sounds like you, drop us a line. Please, no drama, life's too short to be anything but happy.

Finally, we are both very proud Americans. Both of us have served our country and honor and respect those that have served or continue to serve.

I live this lifestyle by choice, my wife because she's married to me and has chosen to stand by my side. I've paid my dues to be here both, physically, mentally and emotionally. I've lost an arm to a drunk being in this lifestyle but continue to ride by choice, not by force.

Those of us that consider ourselves "old school" know there are a set of rules you live by. I was taught those rules very early in life. Live those and try and pass those along to others that want to know the right way. Understand that in this lifestyle RESPECT is everything. It's not a given but earned. Live the life the way it was intended, not the way you want it

Life and everything within it

When you get to the end of all the light you know and it’s time to step into the darkness of the unknown, faith is knowing that one of two things shall happen: Either you will be given something solid to stand on,
or you will be taught how to fly. ~ Edward Teller~.

Life's journey is not to arrive at the grave safely in a well preserved body but rather to skid in sideways, totally out of control and worn out, shouting "Holy Shit"...What a Ride!!

"Those who sacrifice liberty for security and safety deserve neither".
-- Benjamin Franklin

A dog is the only thing on earth that loves you more than he loves himself.”

Life is too short to wake up with regrets. So love the people who treat you right and forgive the ones who don't. Everything happens for a reason, if you get a second chance grab it with both hands. If it changes your life let it. Take a few minutes to think before you act when you're angry. Forgive quickly. God never said life would be easy, He just promised it would be worth it.

"...democracy will cease to exist when you take away from those who
are willing to work and give to those who will not."
-- Thomas Jefferson

"The greatness of a nation and it's moral progress, can be judged by the way it's animals are treated "
-- Mahatma Ghandi

To be a man, you first have to act like a man

It is not the critic who counts, not the man who points out how the strong man stumbled, or where the doer of deeds could have done better. The credit belongs to the man who is actually in the arena; whose face is marred by the dust and sweat and blood and who, at worst, if he fails, at least fails while daring greatly; so that his place shall never be with those cold and timid souls who know neither victory or defeat.
-- Theodore Roosevelt

"Sometimes life hits you in the head with a brick. Don't lose faith. I'm convinced that the only thing that kept me going was that I loved what I did. You've got to find what you love. And that is as true for your work as it is for your lovers. Your work is going to fill a large part of your life, and the only way to be truly satisfied is to do what you believe is great work. And the only way to do great work is to love what you do. If you haven't found it yet, keep looking. Don't settle. As with all matters of the heart, you'll know when you find it. And, like any great relationship, it just gets better and better as the years roll on. So keep looking until you find it. Don't settle."
-- Steve Jobs

You cannot legislate the poor into freedom by legislating the wealthy out of freedom. What one person receives without working for, another person must work for without receiving. The government cannot give to anybody anything that the government does not first take from somebody else. When half of the people get the idea that they do not have to work because the other half is going to take care of them, and when the other half gets the idea that it does no good to work because somebody else is going to get what they work for, that my dear friends, is about the end of any nation. You cannot multiply wealth by dividing it.
--Dr. Adrian Rogers, 1931-2005

"Freedom is never more than one generation away from extinction. We didn't pass it to our children in the bloodstream. It must be fought for, protected, and handed on for them to do the same, or one day we will spend our sunset years telling our children and our children's children what it was once like in the United States where men were free."
-- Ronald Reagan

"The two enemies of the people are criminals and government, so let us tie the second down with the chains of the Constitution so the second will not become the legalized version of the first."
-- Thomas Jefferson

Conduct during hoisting, lowering or passing of flag
During the ceremony of hoisting or lowering the flag or when the flag is passing in a parade or in review, all persons present in uniform should render the military salute. Members of the Armed Forces and veterans who are present but not in uniform may render the military salute. All other persons present should face the flag and stand at attention with their right hand over the heart, or if applicable, remove their headdress with their right hand and hold it at the left shoulder, the hand being over the heart. Citizens of other countries present should stand at attention. All such conduct toward the flag in a moving column should be rendered at the moment the flag passes.

Government's first duty is to protect the people, not run their lives.
-- Ronald Reagan

If you are waiting for anything in order to live and love without holding back, then you suffer. Every moment is the most important moment of your life. No future time is better than now to let down your guard and love.
--David Deida

A man can no more diminish God's glory by refusing to worship Him than a lunatic can put out the sun by scribbling the word, 'darkness' on the walls of his cell.
-- C.S. Lewis