"Great Body Art, Tatted Ladies and those who Love Them"

Ol skool 777 no pic no friends

Ol skool 777 no pic no friends
May 22
Good morning and happy Friday!

Ol skool 777 no pic no friends
May 16
Good morning! Have a great weekend out there!

Ol skool 777 no pic no friends
May 14
Good morning! Rainy days ahead here in Ohio

Ol skool 777 no pic no friends
May 13
Good morning everyone! Have a great day out there!

Ol skool 777 no pic no friends
April 13
Morning everyone! Enjoy!

Ol skool 777 no pic no friends
April 12
I am not the author, but I wish I was: We are seeing the most draconian measures enforced at all levels of government that we've ever seen in our lifetimes, and yet rather than being alarmed by the things going on, so many of you applaud. People are being arrested for spending too much time outside, and you applaud. Pastors are being arrested for daring to hold church services, and you applaud. A child's birthday...See More party is raided by police, and you applaud. A young woman is ticketed for going on a leisurely drive alone because it's deemed "non-essential travel", and you applaud. A parade of school teachers and administrators who wanted to drive through neighborhoods and wave at children is busted up by cops because they were "nonessential," and you applaud. A lone paddleboarder in the ocean on a beach without any other people around is arrested because he's violating quarantine orders, and you applaud. People are being denied life saving medical treatments because they're not a priority right now (not "essential" as deemed by the government) as the entirety of our medical system is focused on one thing, and you applaud. Businesses are beings forcibly closed and padlocked and owners arrested for refusing to shut down, and you applaud. Dairy farmers (and soon, other farmers) are being incentivized to stop dairy farming and to sell their herds, and you don't seem to understand the implications. You're being told to use hotlines and online forms provided by your local governments to report your neighbors who don't obey, and you comply. You scold people day after day for not obeying government edicts, and if any of us dare to question what's happening, you lecture about how we're a danger to society and and we just don't care about people dying. You've somehow managed to convince yourselves that the people whose lives are affected by a virus are MUCH more important than the people whose lives are being destroyed (and in many cases, leading to death) by the effects of a worldwide economic shutdown and impending worldwide depression the likes of which no one has ever seen before. At what point will you start QUESTIONING what's going on? How far does the government have to push before you're jolted awake from your slumber? How far are you willing to go with this? If they told you to load your families onto train cars so that you could be taken to Virus Protection Facilities for your own safety, would you do it? YES. Yes, you would.That much has become painfully obvious to me. And the whole time, you'd be shaking your finger and yelling at those of us who refused, accusing us of being "a danger to society" and "not caring if people die." But they don't have to load you onto train cars and take you to Virus Protection Facilities, or force you to comply, because you do that voluntarily. They control your mind. They control you through fear. They control you by convincing you that the world is a scary dangerous place, but they're here to protect you, care for you, and keep you safe, just as long as you OBEY. They know that as long as you're locked inside your comfortable home with Netflix, Hulu, Facebook, Twitter, Instagram, and a cell phone, while dangling a $1200 check in front of you like a carrot on a stick, you'll comply. No force is necessary for the majority of the herd. YOU ARE IMPRISONED, willingly, and you're too blind to see it. 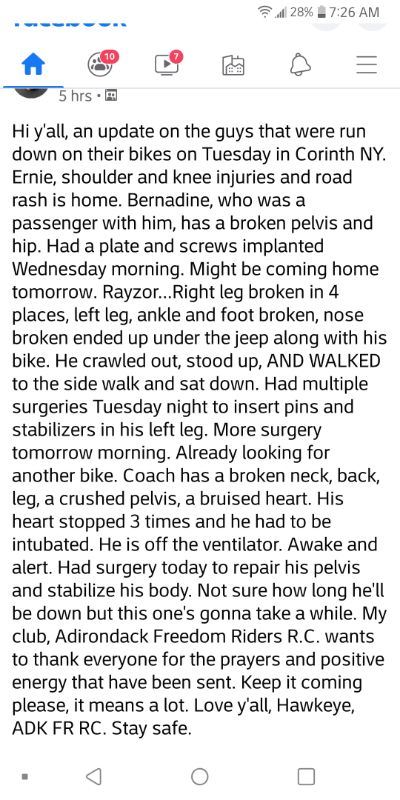 Ol skool 777 no pic no friends
February 17
Good morning everyone!

Ol skool 777 no pic no friends
February 12
Good morning! Have a great day out there!