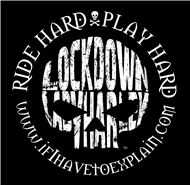 Bikers and Biker Babes With Benefits

Hi all!
We're a married couple, originally from Massachusetts, now in Naples, Florida (and STILL too far from Daytona!). We love meeting new fun friends!! ;)

Every June you can find us in NY at the Harley Rendezvous Classic, every May home in Naples at the ABATE of Florida, Gator Alley Chapter MASH Bash, and every November we're in Lakeland, FL at Roscoe's Chili Challenge. If you're a biker (not the weekend warrior wannabes) and want to go to a real biker party, pick one of these events, or better yet, ALL OF THEM!

We also host a website documenting the biker lifestyle with over 16,000 pictures, all free, at http://www.ifihavetoexplain.com. We post almost every day on the forum page at harleyrendezvous.com, and love to meet others that love to feel the wind in their face!

Feel free to check out our site, and remember... chrome scratches, keep the rubber side down!

you name it, at least one of us probably like it... unless it has the word "YO" in it!

1) If I have to explain, you wouldn't understand.
2) If you don't want to stand behind our troops, feel free to stand IN FRONT of them
3) "...ONE nation, under GOD..."
4) "In the first place, we should insist that if the immigrant who comes here in GOOD FAITH becomes an American and assimilates himself to us, he shall be treated on an exact equality with everyone else, for it is an outrage to discriminate against any such man because of creed, or birthplace, or origin. But this is predicated upon the person's becoming IN EVERY FACET an American, and nothing but an American... THERE CAN BE NO DIVIDED ALLEGIANCE HERE. Any man who says he is an American, but something else also, isn't an American at all. WE HAVE ROOM FOR BUT ONE FLAG, the American flag... WE HAVE ROOM FOR BUT ONE LANGUAGE HERE, AND THAT IS THE ENGLISH LANGUAGE... and we have room for but one sole loyalty and that is a loyalty to the American people." Theodore Roosevelt 1907